One of the joys of collecting are the unexpected – but fascinating – historical and artistic surprises that sometimes accompany a purchase.  A case in point is a wood-engraving I purchased several months ago by Agnes Miller Parker.  The piece, “Fox”, was the 1941 Presentation Print of an organization by the name of  The Woodcut Society.

This organization was the creation of a man by the name of Alfred Fowler.  Fowler was a commodities trader with an interest in art, an entrepreneurial spirit, a love of prints and many connections and friends in the printmaking community.  Two of these friends were Bertha Jaques and James Swann.  Both Jaques and Swann were the Secretary-Treasurer of the Chicago Society of Etchers at different times and Swann held the same position with the Prairie Print Makers for many years.  Swann and Jaques were part of Fowler’s extensive network that resulted in The Woodcut Society (and another organization called the Miniature Print Society) being very successful in obtaining “Presentation Prints” from many of the finest printmakers of this era.

(As a side note – it has been a pleasure working with the extremely capable, knowledgeable and supportive Amon Carter Curators – Shirley Reece-Hughes and Maggie Adler –  on these gifts to the Museum.)

With the purchase of the “Fox” we also received some of the promotional and supporting literature for the Woodcut Society.  Here is the “Fox” by Agnes Miller Parker: 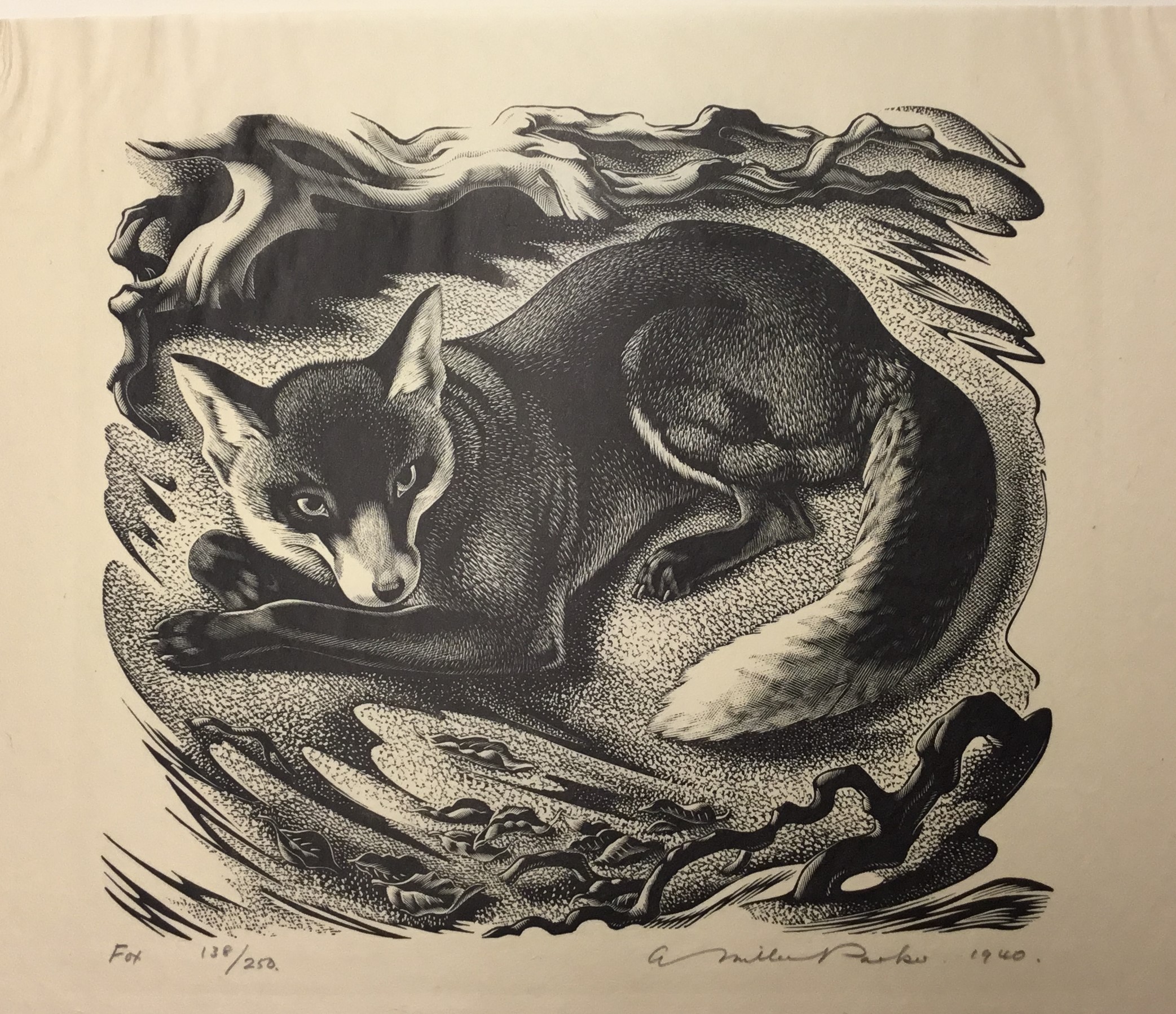 It is a beautiful wood engraving.  But even more remarkable were the conditions in which it was created.  As Alfred Fowler points out in his accompanying letter:

“At this time we are glad to be able to add our 19th publication to your portfolios.  As you will see, it is the long-promised engraving by Miss Agnes Miller Parker.  The delay in its appearance has been due to many unavoidable interruptions experienced by the artist at her studio near war-torn London.  The block literally was engraved within sight and earshot of the dropping bombs, which gives the print an association value unique among our publications.”

Each of the Woodcut Society prints had descriptive copy as part of the presentation portfolio.  For Agnes Parker’s “Fox” the critique was provided by William McCance, an artist, teacher and art critic (who also was Parker’s husband): 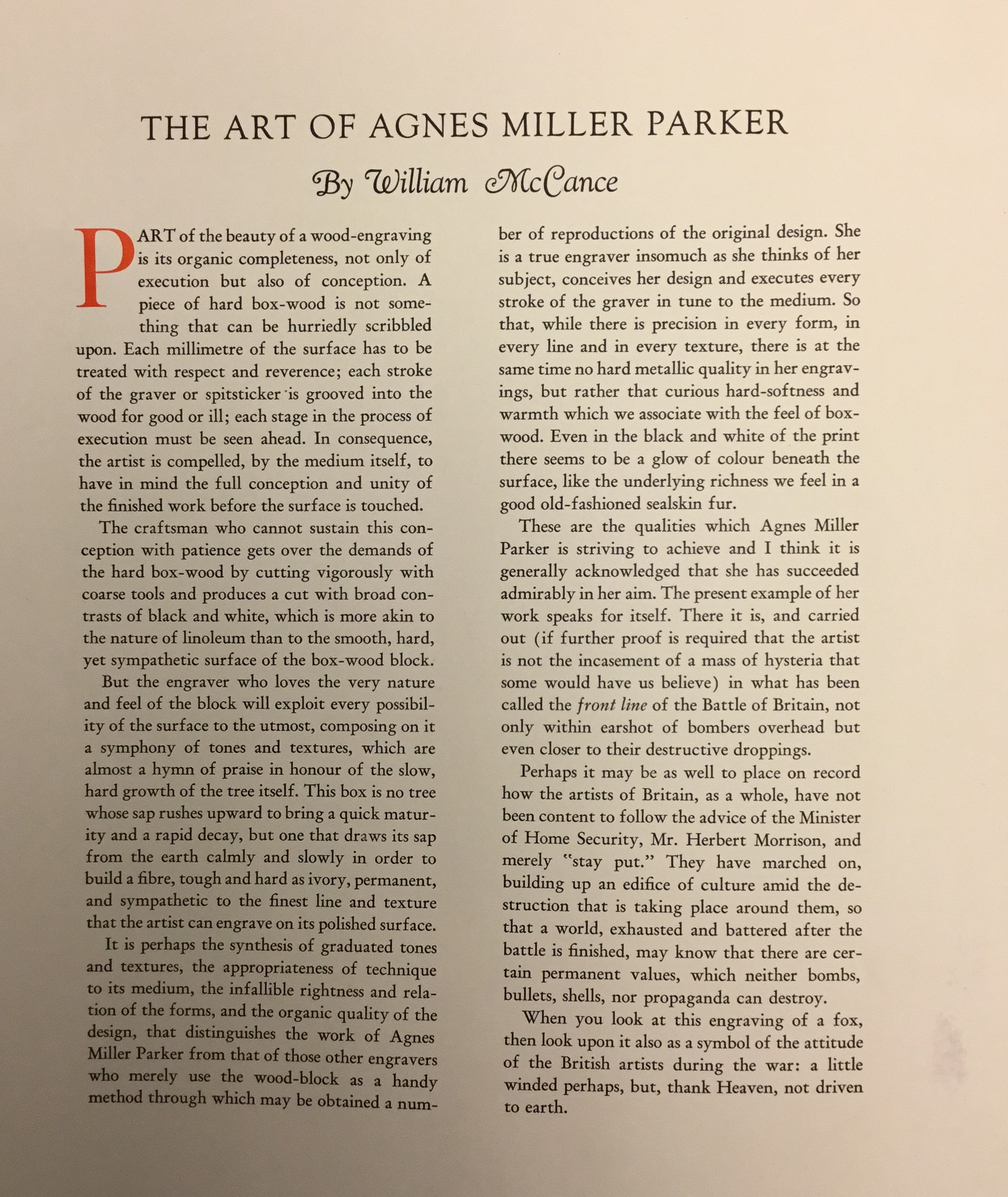 McCance’s commentary is noteworthy – particularly for the second to last paragraph.  It contains some sage advice that was true 1,000 years ago, in Britain in 1941 and in America today:

“Perhaps it may be as well to place on record how the artists of Britain, as a whole, have not been content to follow the advice of the Minister of Home Security, Mr. Herbert Morrison, and merely “stay put.”  They have marched on, building up an edifice of culture amid the destruction that is taking place around them, so that a world, exhausted and battered after the battle is finished, may know there are certain permanent values, which neither bombs, bullets, shells, nor propaganda can destroy.”