A few months ago I had the good fortune to be able to “audit” a workshop on making a lithograph.  The workshop was given by David Conn for the Docents of the Amon Carter Museum in Fort Worth.  It was held at the The Shaw Street Studio Fine Art Press.  David is the founder.

My wife, Kathy, and I arrived a few minutes before the session was to begin and we made a brief tour of the facilities.  One room was dedicated to etching with a beautiful Sturges Etching Press.  This was the same type of press my father (Charles Rosenthal) and grandfather (Henry Rosenthal, Sr.) used to print etchings in the 1930’s.  The inventor, Lee Sturges, was a friend of my grandfathers and was also very involved in the Chicago Society of Etchers where he served on the Board and as President for many years.  (For more information about the Sturges press and printing of etchings in Chicago in the early 1930’s go to:http://www.inpraiseofprints.com/a-visit-to-tree-studios-chicago-illinois/

Seeing the press gave me an idea.  I had copies of about 1/3 of my Dad’s etchings as prints.  However, when my Dad passed away, my brother and I found all of his etching plates.  He and I split the plates so that we could share in the enjoyment of my Dad’s art.    Wouldn’t it be great to have a complete set of prints?  So, I asked David if he would be interested in being the printer for this project.  Thankfully, he said yes. 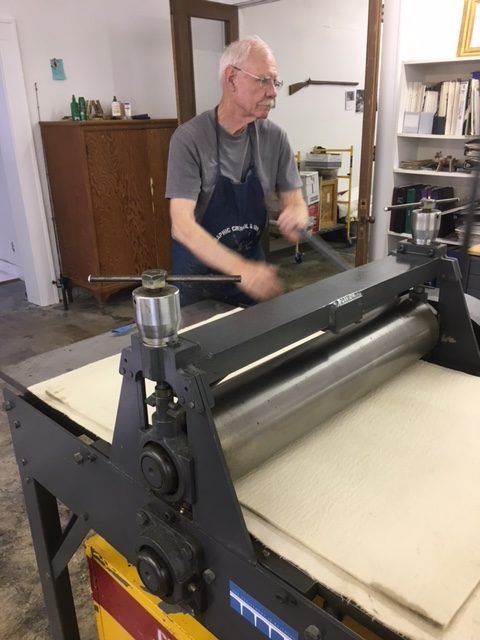 David Conn on the Sturges Press in Shaw Studio

I asked my brother to send his half of the plates to Fort Worth.  David and I negotiated a fair price for the project which consisted of two etchings from each plate.  My Dad did a total of 55 etchings.  My brother and I finally had a way to have prints of all 55.

David was under some time constraints because he had sold the Sturges press to an artist in Austin.  I had hoped to spend some time in the Studio as David was printing the etchings.  However, due to our conflicting travel schedules, we were unable to arrange for a mutually agreeable time to meet.  After a few weeks, I received an email from David – the etchings were completed and I could pick them up.

While I was at the Studio looking at the etchings (they are beautiful!), David mentioned that he still had the press.  The purchaser was figuring out the logistics of moving the press.  Since it weighs 1,700 pounds, loading it on the back of a pick-up truck was not going to work.  So I asked if David would be willing to print a few more etchings of one the plates with me as an observer and photographer.  “Sure, how about Thursday afternoon.”  And now the story gets even better.

I arrived at the appointed hour wearing my usual work attire – khaki slacks and a golf shirt.   David suggested I might want to wear an apron.  He just happened to have an extra “Shaw Street Studio” apron for me.

David had wetted 4 sheets of paper.  I observed and photographed happily as David printed two etchings.  Then he asked me if I would like to print one.  With some reluctance I said yes.  So I inked, wiped and heated the plate.  Then I placed it on the pre-prepared template on the press bed, laid the paper on top and ran it through.  I have to admit I was worried about how it would turn out.  To my amazement – it was a rich, clean impression – definitely a keeper.

So, the following is a step-by-step process of printing an etching.  Printing by Jim Rosenthal.  Photographed by David Conn. 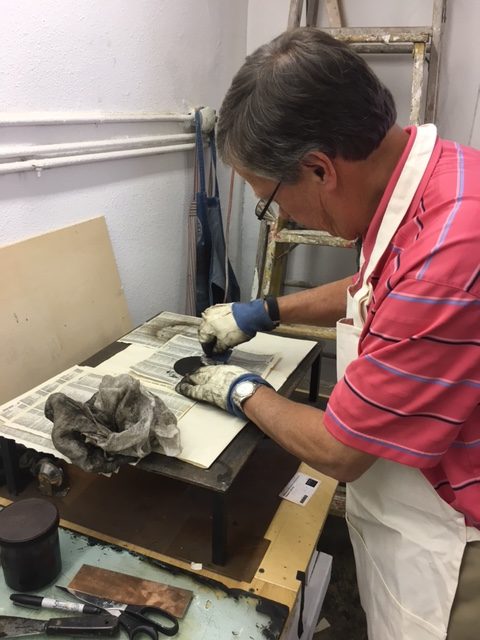 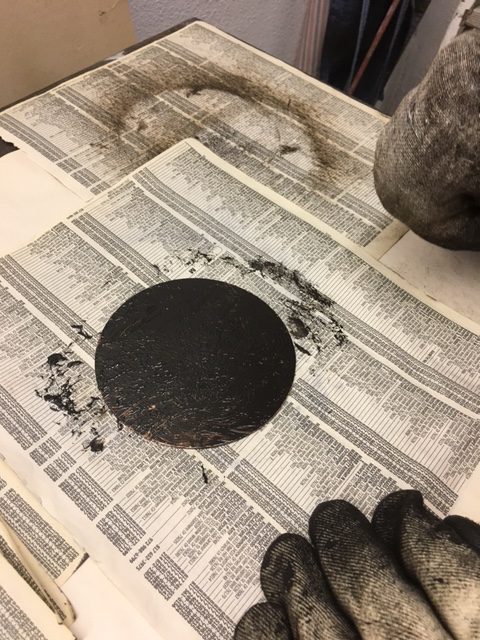 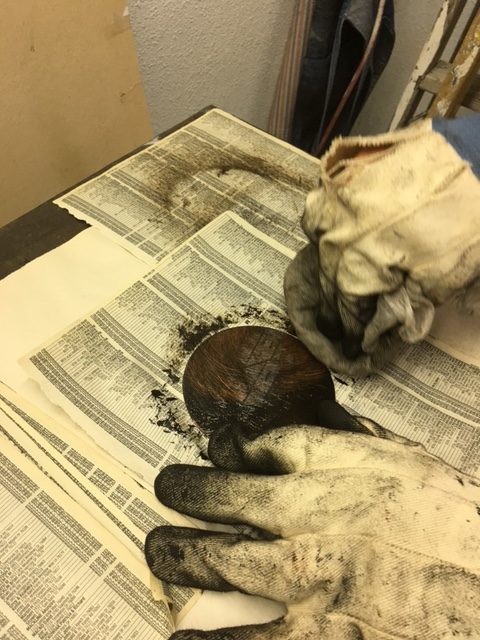 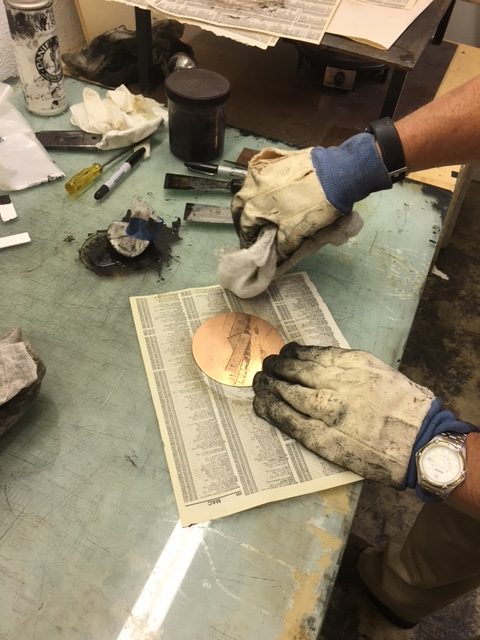 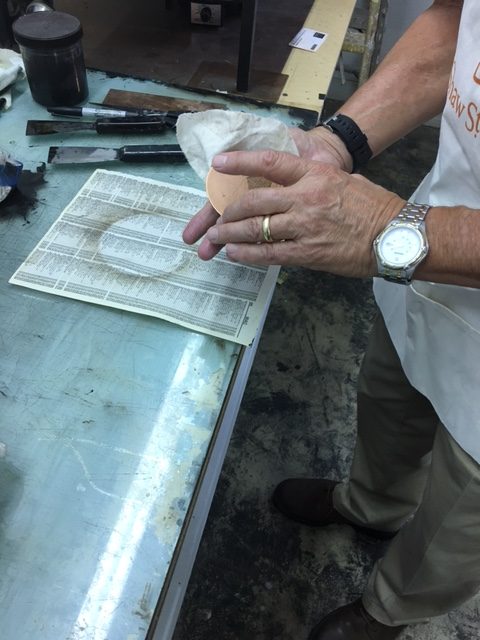 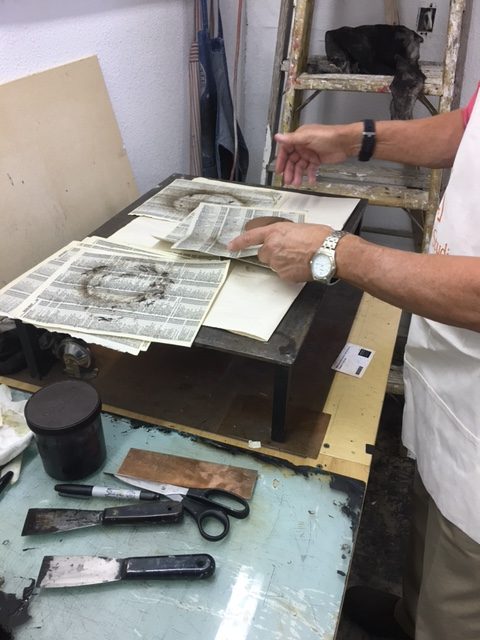 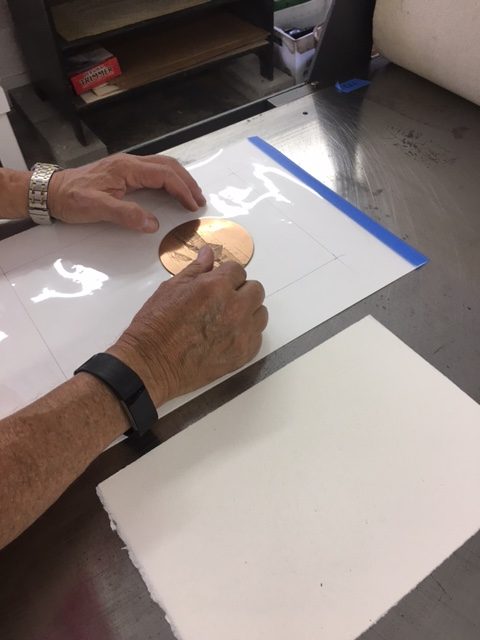 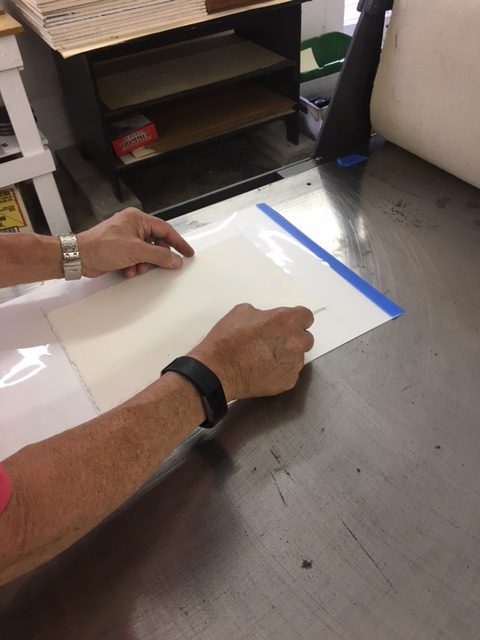 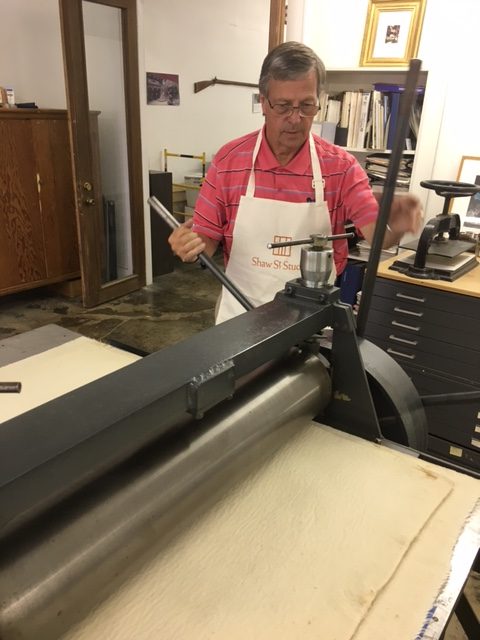 “Pulling the Print” through the press.  The Sturges Press is a fine piece of machinery.  It is solid and smooth. 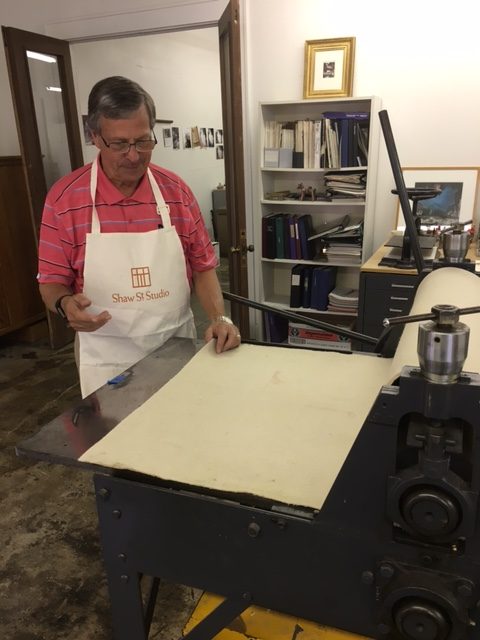 Removing the felts from the printed image 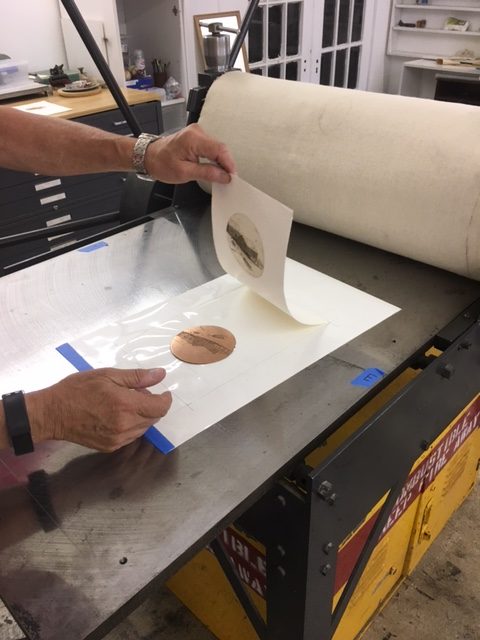 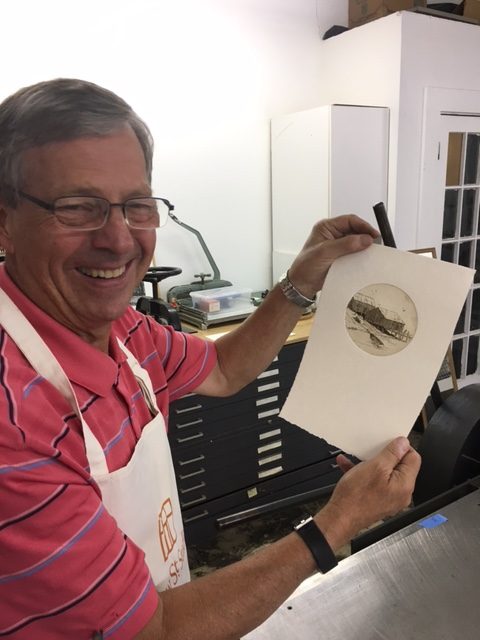 The Happy Printer with the Finished Print

David recently retired as a Professor of Art at TCU.  I envy his many students.  He is a gifted teacher – knowledgeable, supportive and patient.  I am very fortunate that our paths crossed for this experience.

When we printed the second and final etching, David said:  “What a great way to end the story of this press in my studio.”

I agree.  Thanks, David.