James Swann was born on a ranch near Merkel, Texas in 1905.  While attending Sul Ross College in Alpine, Texas in 1923 he realized that he had artistic talent and began a career that would span for almost 60 years.  While at Sul Ross he was influenced by Anna Keener and Elizabeth Keefer – both of whom were trained at the Art Institute of Chicago.  Keefer was involved with the Chicago Society of Etchers and her work was selected for a number of CSE annual shows in the 1920’s and 1930’s.

After graduation, Swann moved to Fort Worth for a position with the Southwestern Engraving Company.  In 1927 he moved to Amarillo to be manager of the company’s office there.  By 1931 he had completed his first etching – Lone Pine – Estes Park.  In 1932 he moved to Dallas where he became involved with the art community in that city.  His major supporter and teacher was Frank Klepper – a well known landscape painter.  While in Dallas he completed a total of 31 etchings – most with a regional theme.

In 1933 he visited Chicago to attend the Century of Progress World’s Fair.  He, like many others of his time, was greatly influenced by the Fair and he decided that he would like to return to the city at some point to pursue his artistic career as an etcher.  But he had many friends in Dallas and in February of 1935, he was elected secretary-treasurer of the newly formed Dallas Print and Drawing Collectors Society.  Other founding members of the Society were Jerry Bywaters, Alexandre Hogue, Frank Klepper, Allie Tennant and Perry Nichols.  This was the start of his long association with print societies as he later served in the same capacity for the Chicago Society of Etchers and the Prairie Print Makers.

By December of 1935 he was back in Chicago to serve as an apprentice to the etcher and teacher, Morris Henry Hobbs.  Hobbs had a studio in the Tree Studios Building and had just ended a partnership with Henry Rosenthal, Sr. formed to produce etched souvenir cards for the 1934 version of the World’s Fair. (For more information on Hobbs, Tree Studios and this partnership go to – http://www.inpraiseofprints.com/a-visit-to-tree-studios-chicago-illinois/)

Swann stayed in Chicago for the rest of his life.  His art was greatly influenced by the Regionalist movement of the 1930’s and 1940’s.  His associates both in Dallas and Chicago believed, as he did, that the source of inspiration and subjects could and should be found nearby.  Most of Swann’s etchings were of Chicago and the surrounding countryside.  (Although he did do some etchings based on scenes he had photographed during his travels to Mexico, Europe and Japan.)

Three of the most iconic sights of Chicago are the Art Institute, the Prudential Building and the Water Tower.  Swann created etchings of all three.  On a recent trip to Chicago I photographed them as well.  In order to compare the then and now images we have matched them in the same frame. (Thanks to Emily Allen.)

The Art Institute of Chicago 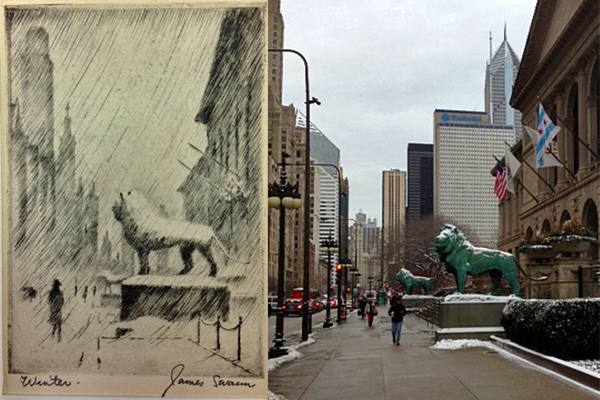 The Art Institute of Chicago Building was built to be a part of the Columbia Exposition Chicago World’s Fair of 1893.  The famous lion statues were created by Edward Kerneys and also date from 1893.  The Art Institute played an integral role in the development of etching in Chicago in the early 1900’s.  The Chicago Society of Etchers had their annual juried show at the Institute every year from 1911 to 1931.  Swann was an active member of the CSE for many years and served as its Secretary after Bertha Jaques retired.  One of the reasons the Art Institute and the Chicago Society of Etchers parted ways was that the Society maintained a focus on representational art while the Art Institute was more interested in representing more modern art trends.  It is interesting to note that the Swann etching of the Art Institute is more impressionistic than representational.  The mechanism of a wind-blown, snowy scene creates the mood and feeling of a cold wintry day.  It almost makes you want to bundle up in your warmest coat.  In 2015 when the picture on the right was taken temperatures in the City were in the high teens. 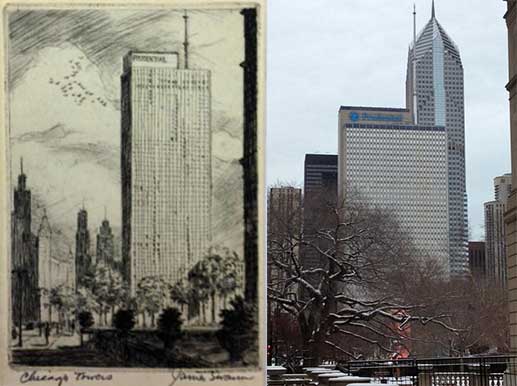 The Prudential Building was the gem of the Chicago skyline in the 1950’s and early 1960’s.  It was the second tallest building the the city and dominated Michigan Avenue.  Views from its observation deck were spectacular and on a clear day one could see across Lake Michigan.  The “Top of the Rock” restaurant on the Prudential Buildings top floor was a memorable dining experience.  I ate there several times with my parents and it was the ultimate spot to impress a High School Prom date.  As one can see in the 2015 picture the building is now dwarfed by its neighbors.  The restaurant closed many years ago.  After 56 years the small trees in the Swann etching now cover the bottom half of the building.   For a great article on the Prudential Building – past and present – see http://arcchicago.blogspot.com/2013/09/the-prudential-rediscovers-its-shine.html 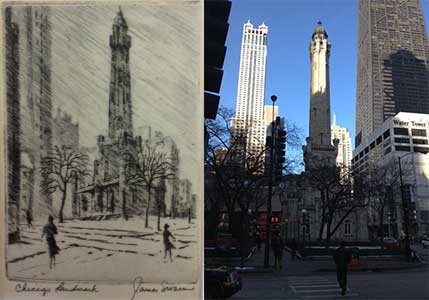 The Chicago Water Tower was one of the few buildings left standing in this district of Chicago after the great fire of 1871.  To many it represents the spirit of the City to persevere when faced with adversity.  It is interesting to note that the above mentioned Columbia Exposition of 1893 was held in the city just a little over 20 years after the devastating fire.  Again, Swann uses a snowy day to add to the impression of this “Chicago Landmark.”  In the modern day water tower picture the structure is dwarfed by the skyscrapers in the background.

Note: For more details on the life and work of James Swann see: James Swann: In Quest of a Printmaker with Presentation Prints of the Chicago Society of Etchers, Prairie Print Makers and the Woodcut Society by Joseph S. Czestochowski, Cedar Rapids Art Museum, 1990.

By Jim Rosenthal Success as an etcher came quickly for John W. “Winks” Winkler. He made his first etching as a student at the San Francisco Institute of Art in 1913. He was 19. By the time he was 28, he had won 3 Logan Awards from the Chicago Society of Etchers, had one of […]

By Jim Rosenthal The “Renaissance Man” is defined as someone who is knowledgeable, educated and proficient in a wide array of fields. The best example is Leonardo da Vinci. The best example in Chicago for the first half of the 20th Century was Ralph Fletcher Seymour. Seymour was a man of many talents. He was […]

By Jim Rosenthal Dateline – 1934 – Chicago – Century of Progress Exhibition (Chicago World’s Fair) Leon Rene Pescheret had a good year in 1933. Despite the economic Depression, he had sold many of his etchings of the Fair and was looking forward to the expanded and improved version of the “Century of Progress” Exhibition […]

By Jim Rosenthal In 1946 Charles Merrick “Chili” Capps knew as much about the running of a print association as anyone. He was one of the founders of the Prairie Print Makers. He served as Secretary-Treasurer of that organization from 1940 to 1942 and was serving at that time as President. He also was a […]

By Jim Rosenthal James Swann was born on a ranch near Merkel, Texas on July 31, 1905. He attended Sul Ross College in Alpine, Texas and graduated in 1927. After graduation, he worked for an engraving company in Amarillo and Fort Worth. By 1931 he had completed his first etching and had moved to Dallas. […]

One night in May of 1927, a young artist by the name of Levon West was at dinner with friends when he heard the news about an aviator named Charles Lindbergh who had taken off in his “Spirit of St. Louis” airplane to be the first person to fly solo across the Atlantic.  West remembered […]

One of the most interesting artists of the first half of the Twentieth Century was Cyrus Leroy Baldridge.  His life story rivals that of any adventurer of any era.  It is ironic, but fitting, that one of his most popular books was the illustrated “Adventures of Marco Polo.”  He was a “Marco Polo” of his […]

I had heard great things about the McNay Print Fair from other print collectors and my friends at the Amon Carter Museum.  Most of my print purchases have been through auctions, but having the input and knowledge of print dealers was a missing piece. The Print Fair lasted two days – March 3 and March […]

The Morris Henry Hobbs – A Catalogue Raisonne of Etchings, Engravings and Lithographs by Reed W. Isbell is now available.  The artistic story of this well-known Chicago and New Orleans print maker makes for a fascinating read and a valuable resource material. Even though Hobbs also produced oils and watercolors, the book focuses on the prints that […]